Smoke in the Air 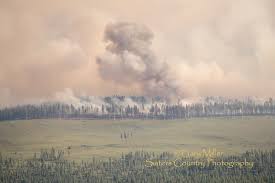 In the clean crisp mountain air people are able to run free and have fun, but what happened before that? About a month ago the air was very hard to breath in with lots of thick smoke clouds. The smoke mostly came from a recent fire called the Milli fire it was caused by lightning and burned 24,079 acres 9 miles from Sisters, Oregon. The fire was able to make tons of smoke and keep burning for a month because it was fueled by dry timber and brush which made all that black smoke.

People didn't have a great time with the the smoke because when it gets in your lungs and eyes it irritating. Some people with asthma can't deal with the smoke because they don't have as much of lung capacity and the smoke is heavier than the surrounding air so it won’t come out of your lungs as easily. Lots of people were wearing masks which helped them keep the smoky air out of their lungs.


Scott Henderson said ”the smoke was horrible.” Emily said “the smoke was annoying and inconvenient.” Something that we all can agree on is that this smoke has impacted us and given us more awareness to be prepared.
Posted by Jennie Sharp at 9:16 AM